Tessera teacher Amy Barton sends a weekly challenge to her students and they post their answers, findings, and creations in Teams. Last week's challenge was to fold 10 paper cranes, because origami cranes are a symbol of hope and healing during tough times.

One student, Ari, took the challenge one step further and about five times larger. He wrote:

"I made a HUGE paper crane that had a 12 foot perimeter with 3 feet of paper on each side before it was folded! Its wingspan is approximately 3 and a half feet! I also made a smaller one, but I forgot how large the piece of paper that I used was. If you are wondering where I got such large paper the answer is I used a white wrapping paper." 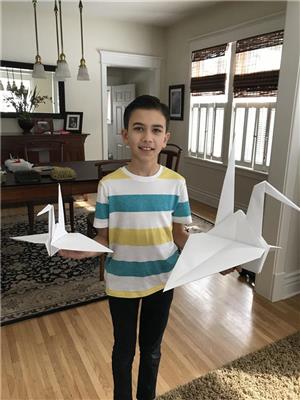 Ari said he is planing to make another mega crane that is 4 times larger than his largest crane. We'll definitely want a picture of that too, Ari!  #ORIGAMIROCKS