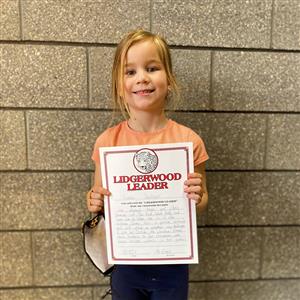 Despite the year of twists and turns, many of our schools are trying to keep important pre-pandemic traditions alive.

At Lidgerwood Elementary, COVID-19 won’t keep them from celebrating their exceptional students every month through the ‘Lidgerwood Leaders’ program.

“It is a goal of most students to become a Lidgerwood Leader,” said Principal Steve Barnes. “I’ve been doing a version of the Lidgerwood Leader for as long as I’ve been a principal – over 20 years – and everywhere I’ve been it’s been a really special program.”

Selected by their teacher, a Lidgerwood Leader is someone who:

On the last Tuesday of every month, Mr. Barnes will typically hold a special recognition luncheon in the library for all the Leaders and invite their family to take part in the festivities. 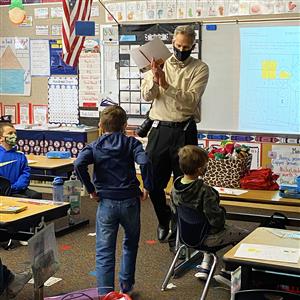 “The families love to come and celebrate their student, and the students love having family members at school to have lunch with them,” said Steve.

This year, however, the way they’ve had to recognize students has evolved from month to month.

“We held zoom meetings with parents and students when they were at home at the beginning of the year,” said officer manager Susan Stanifer-Miller. “Then when they started coming back to class in person, we adjusted so Mr. Barnes would recognize some students in class and some online.”

Now that grades K-4 are in class full time and grades 5 & 6 are on a hybrid model, Mr. Barnes spends the last Tuesday of every month going classroom to classroom to recognize the Lidgerwood Leaders and celebrate their success with their classmates. 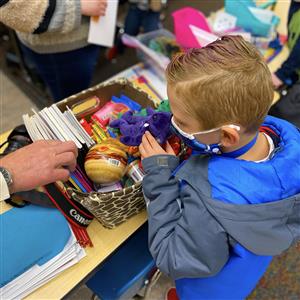 Student gets a certificate and a hand-written note from their teacher, explaining why they were chosen as the Leader for that month. They also get a handful of coupons to different local establishments, and perhaps the most exciting part of all, the students get to pick a prize from Mr. Barnes’s treasure trove of goodies. Things like coloring books, stuffies and slime.

They also get their picture taken by Mr. Barnes to be displayed on the school’s wall of Leaders. 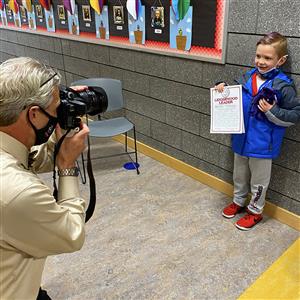 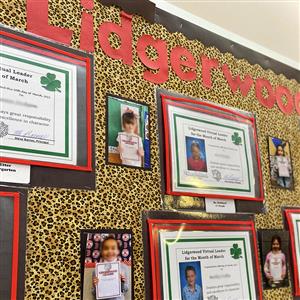 While it’s different from the original Leaders luncheon, Mr. Barnes says it’s brought more attention to the program than ever before.

“I think it’s because more students are actually seeing their classmates get recognized as a Lidgerwood Leader, all the fanfare that was usually reserved for the luncheon, and it motivates them to be a Lidgerwood Leader someday,” said Steve.

“We’ve had students get this award who have NEVER had it previously,” said Susan.