Kim Taylor is a problem solver. When she saw a demonstration of the Spokane Police Department’s bomb disposal robot at a recent STEM fair, she thought its grasping mechanism could be improved.

“The end effectors didn’t have much functionality,” the Sacajawea Middle School teacher said. “I thought we could create a kind of boot with different tread patterns that would increase surface area and static friction. It would give it the ability to pick up smaller things – similar to the way a person would change shoes depending on the type of terrain they’re running on.”

Two years ago, Taylor created an advanced 8th grade engineering class at Sac. Since every student project centers around community service, outfitting the robot was a perfect fit.

On Thursday, Officer Toby Bryer of the SPD bomb squad brought the robot to Sac to demonstrate its capabilities. Used to remotely detonate bombs, the robot has four cameras, and can reach more than 10 feet. It also has the ability to go up and down stairs.

“Hopefully you’ll design something functional and that gives us more positive control,” Bryer told the class. “If it works well, we would like to share it nationally. It will be inexpensive to reprint a part if it breaks.”

With their end-of-semester deadline just days away, students got right to work. They asked questions and took measurements, then gathered in small groups to start brainstorming. They’ll use a computer-aided design program to hone their pencil sketches, and then print the result with a 3D printer filled with a rubberized plastic filament.

Designing parts to improve the functionality of bomb disposal robots is a weighty task for a middle schooler, but the pre-engineering students took it in stride.

“It’s important that we, as eighth graders, get opportunities like this to help out in the community,” said student Sarah Hegde.

“It’s great that people trust us and our ability,” added student Hallie Brigham. “And that they know we take things seriously.” 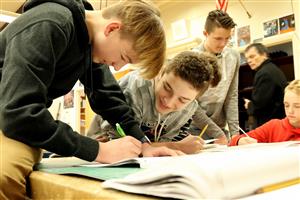 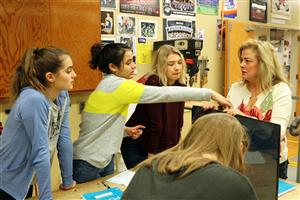 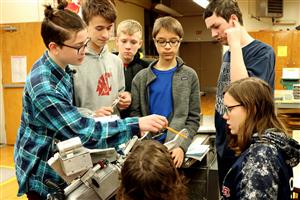